8 Physicians (and Practices) Who Are Winning at Social Media

Doctors shouldn’t interact with patients in social media because they don’t have time, and doing so contributes to physician burnout. Plus, there’s no way to measure ROI.

Doctors should interact with patients in social media because that’s where patients are. And instead of interacting with just one patient at a time, they can engage a huge population at once.

No surprise here: as a content marketing agency, we fall into the latter camp. Three big reasons:

While doing research for this post, we asked Dr. Deanna Attai, a breast surgeon who ranks No. 5 on Onalytica’s list “Cancer Care: Top 100 Influencers and Brands,” to share her perspective. She’s also a co-moderator of the #BCSM (breast cancer social media) chat hosted weekly on Twitter.

“There is a significant amount of dangerous and flat-out wrong information online,” Dr. Attai says. “And the majority of patients are going online for at least some medical information. As physicians in the office we see this all the time, yet we do nothing to create good credible content. Many simply tell their patients ‘stay off the internet.’ That is just not an effective solution.

“One of the primary roles of a physician is to educate. There is a limit to what we can do one-on-one in the office. With very little effort, we can help educate those patients that we don’t see in our offices. While this doesn’t make me any money, it’s an integral part of what I do as a physician.”

Though Dr. Attai doesn’t use social media as a way to grow her practice — but rather as a way to interact with patients, researchers and other physicians in the breast cancer community — she realizes some doctors choose to do so.

“I don’t believe having a good website or other social media presence really translates to practice growth. I think it can help get patients in the door — patients are commonly going online to search for information prior to making a new patient appointment, and if there is content that the physician created, that might leave a positive impression,” Dr. Attai says. “However, to grow a practice, you have to provide good quality care, not just have a nice website or marketing campaign. I do know physicians that use their social media presence as a way to market their practice, but it’s not something I ever considered.”

That said, here are some physicians we say are winning at social media. Before we get started, though, here’s our criteria:

Without further ado, here’s our list of Physicians Who Are Winning at Social Media, in no particular order. 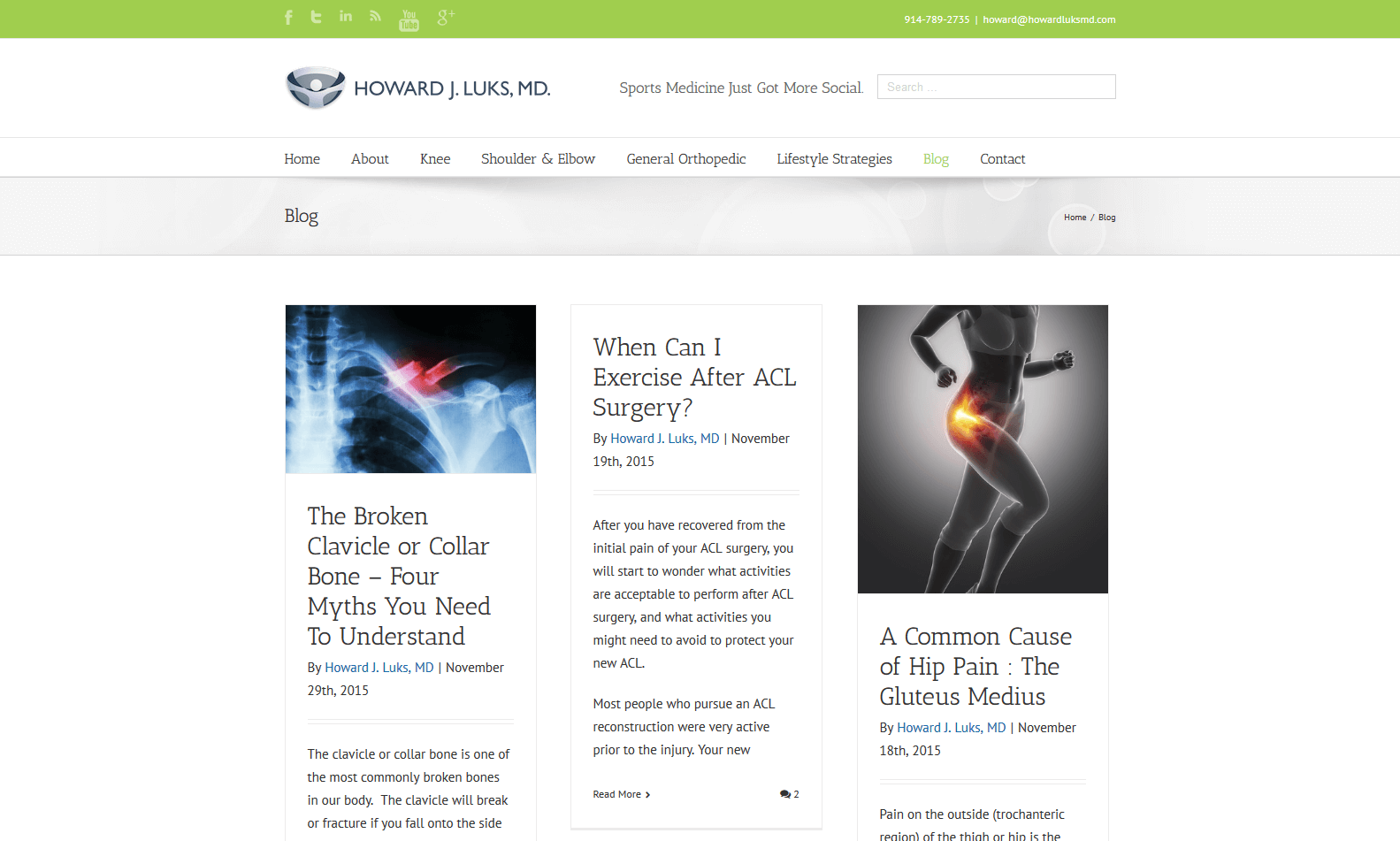 Why he’s winning: For starters, he has a killer website. In essence, Dr. Luks’s website is a vehicle to publish patient-focused topics like “Why does my shoulder hurt at night,” etc.

After users spend a certain amount of time on his site, an invitation to sign up for blog updates will pop up on the screen. The advantage for patients is that after signing up, they begin receiving emails updates with credible, relevant content. The advantage for Dr. Luks’s practice is that they can collect names and info on the people who are signing up, and hopefully convert those “leads” into paying patients.

Other reasons: He’s using a number of tools — videos, blog posts and others to interact with patients. He also lets followers in on some of his personal interests, one of which is running. 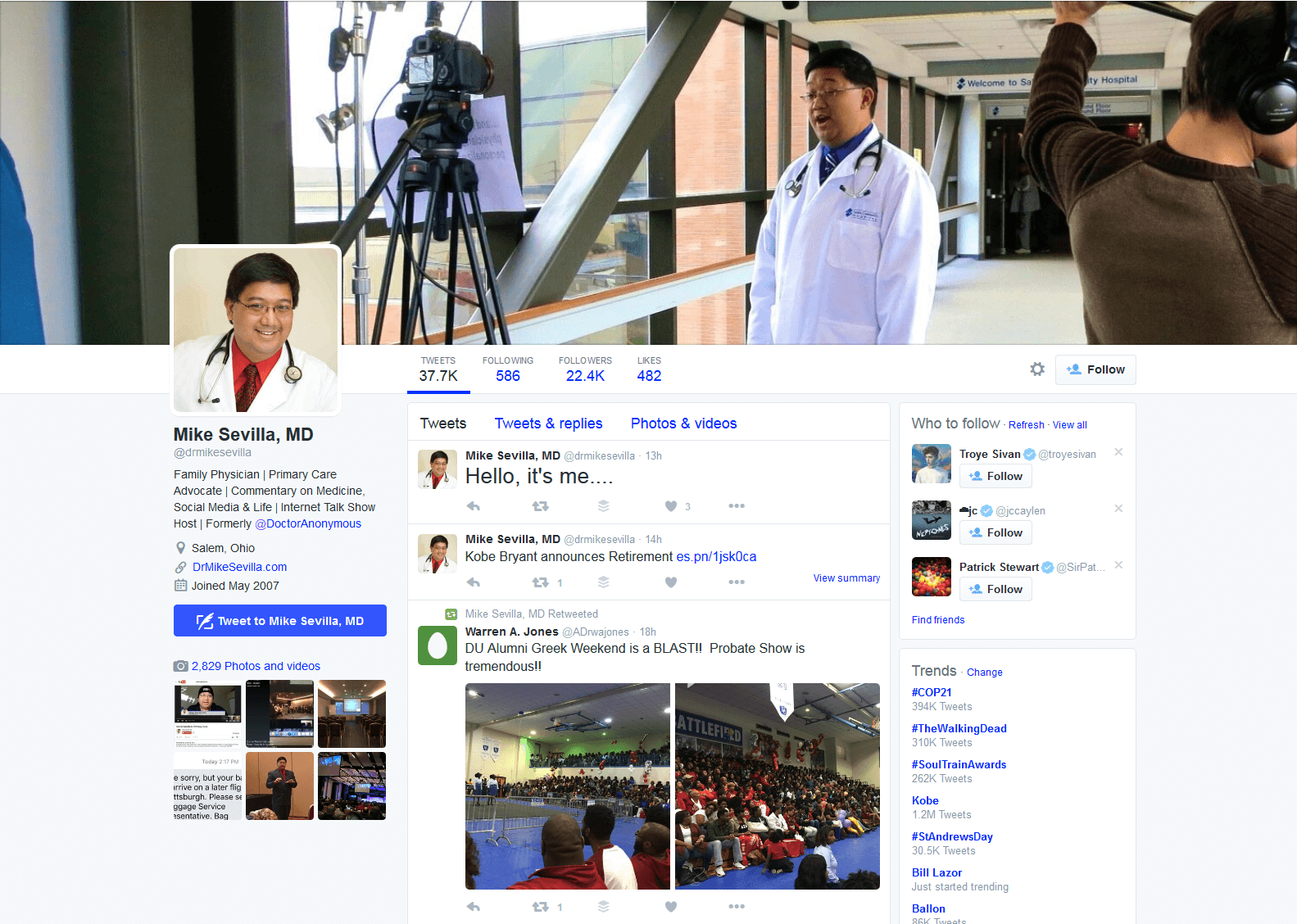 Who he is: An Ohio-based family physician 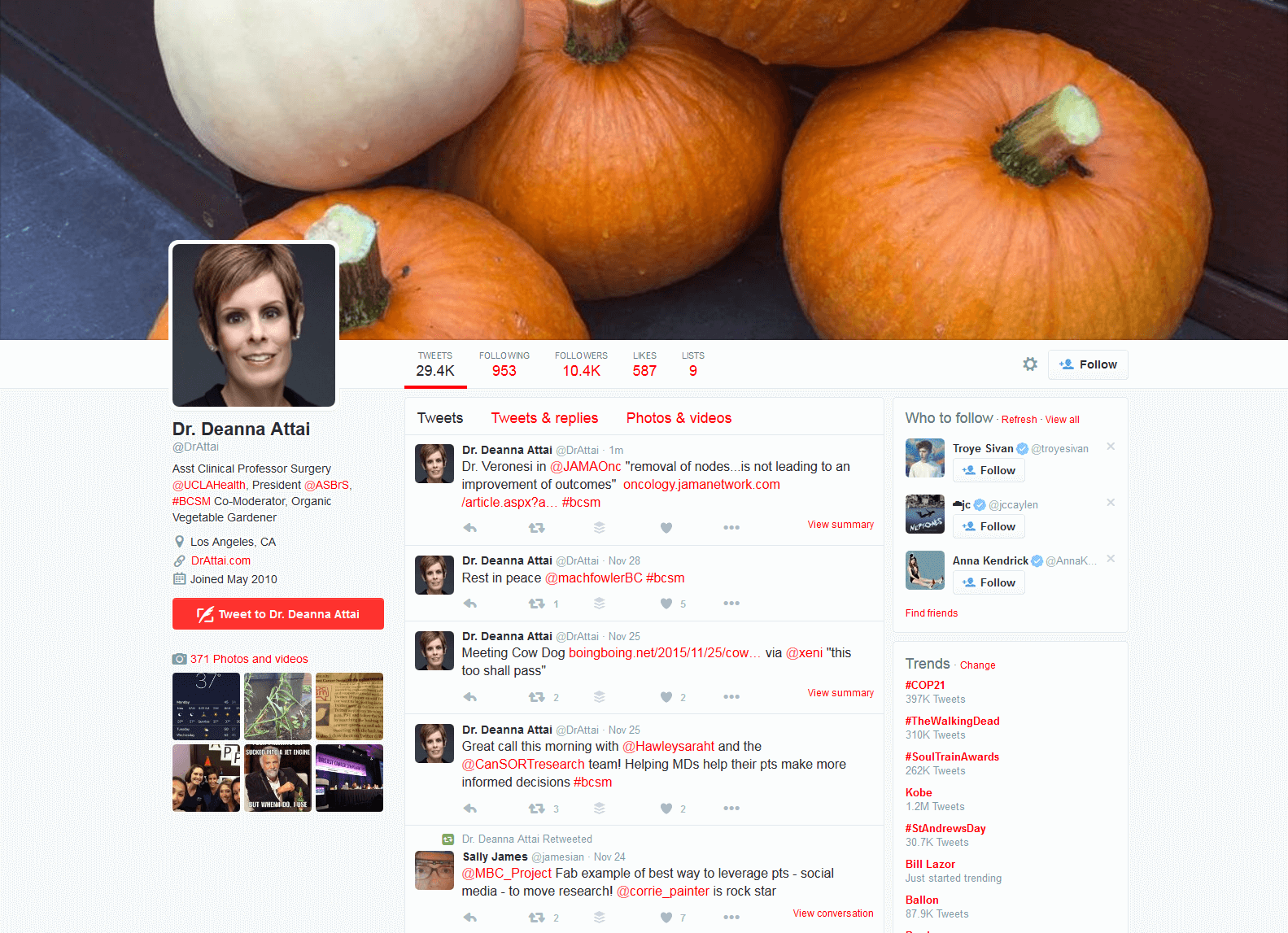 Who she is: A breast surgeon practicing at UCLA Health Burbank Breast Care

Why she’s winning: She plays a huge role in the #BCSM community by co-moderating the weekly #BCSMchat. With her co-moderaters, breast cancer survivors Jody Schoger and Alicia Staley, she has logged several hundred hours of conversation with the community of breast cancer patients, family members of patients, physicians and researchers who follow the chat on Twitter.

Who he is: Cardiac electrophysiologist practicing in Louisville, Kentucky. He’s also a palliative care doctor.

Why he’s winning: Like Dr. Luks’s website, Dr. Mandrola’s site is basically a vehicle for publishing patient-friendly blog posts. For instance, in a recent post, he provides much-needed context around rising death rates of white, middle-aged Americans. He also shows his human side with (funny) posts about how he, too, is a patient and has difficulty adhering to his own doctors’ orders.

About the practice: This Houston-based practice is headed by Drs. Kourtney Sims and Terri Samuels

Why they’re winning: For starters, they have a beautiful website, complete with a patient-focused blog. They then promote their blog posts through the practice’s Facebook and Twitter feeds. Their site also has a section specifically for prospective patients, which spells out different plans they offer patients that are beyond services typically covered by insurance.

One tactic they’re using is providing their own take on recent medical developments. For instance, a study was recently published about whether acupuncture can reduce hot flashes that are caused by some breast cancer treatments. By covering this topic, Crossroads is not only alerting their site visitors about the study, they’re also providing much-needed context for patients. 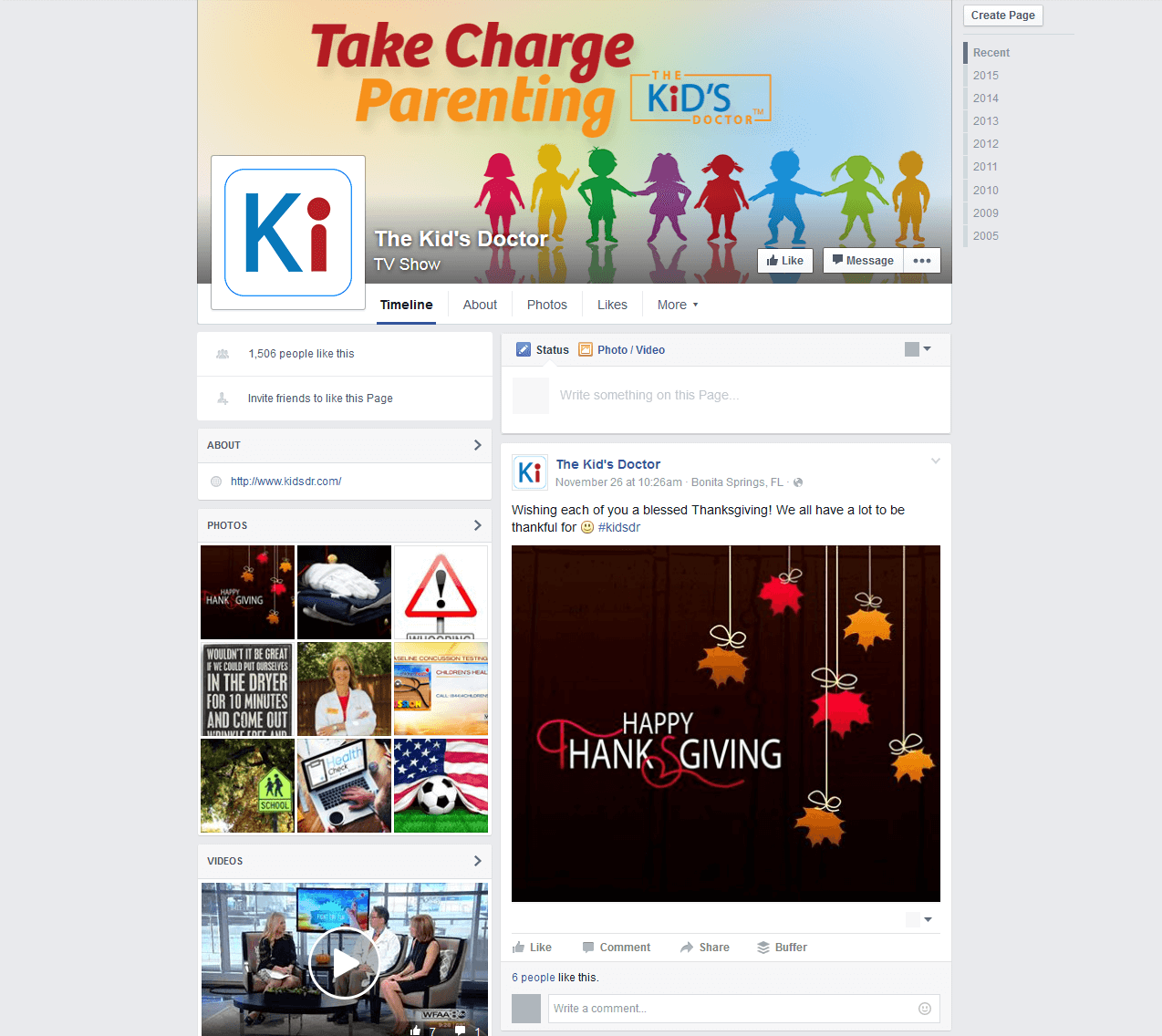 Who she is: A Dallas-based pediatrician with a nationally syndicated newspaper column.

Why she’s winning: Kids don’t come with an instruction book, sadly. If they did, though, it’d probably be written by Dr. Sue (as she’s commonly known). She covers anything under the sun that could possibly be tied to parenting: fevers, vaccinations and tummy bugs, as well as timely topics like the players on the U.S. Women’s World Cup team who are also mothers. 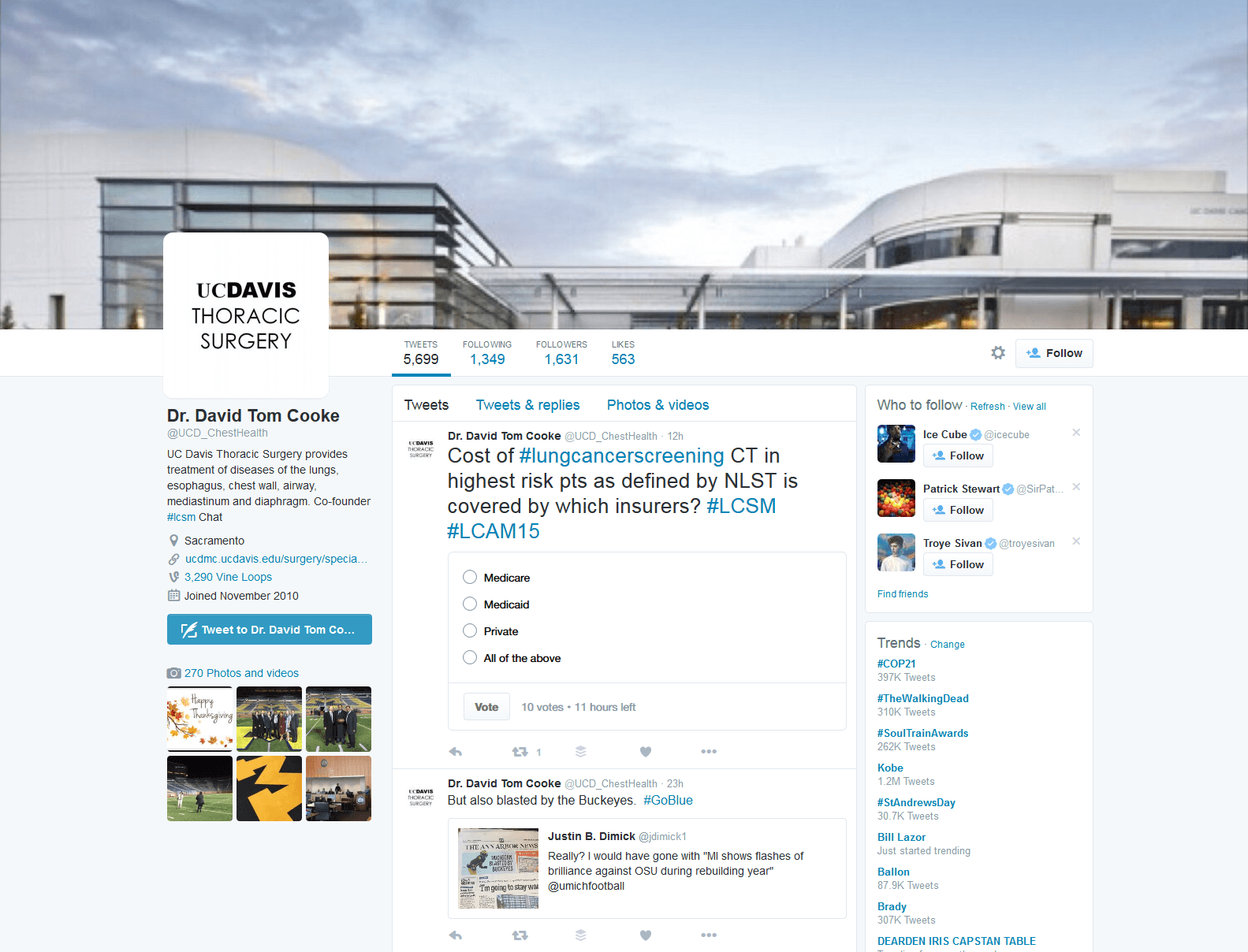 Why he’s winning: Dr. Cooke is one of the physicians behind the #LCSMchat (lung cancer social media), where, like Dr. Attai, he often interacts with followers in that community. He has also co-hosted live Google Hangouts with the National Cancer Institute and #LCSM community, where followers could ask questions in real time on Twitter by using the #LCSM hashtag. 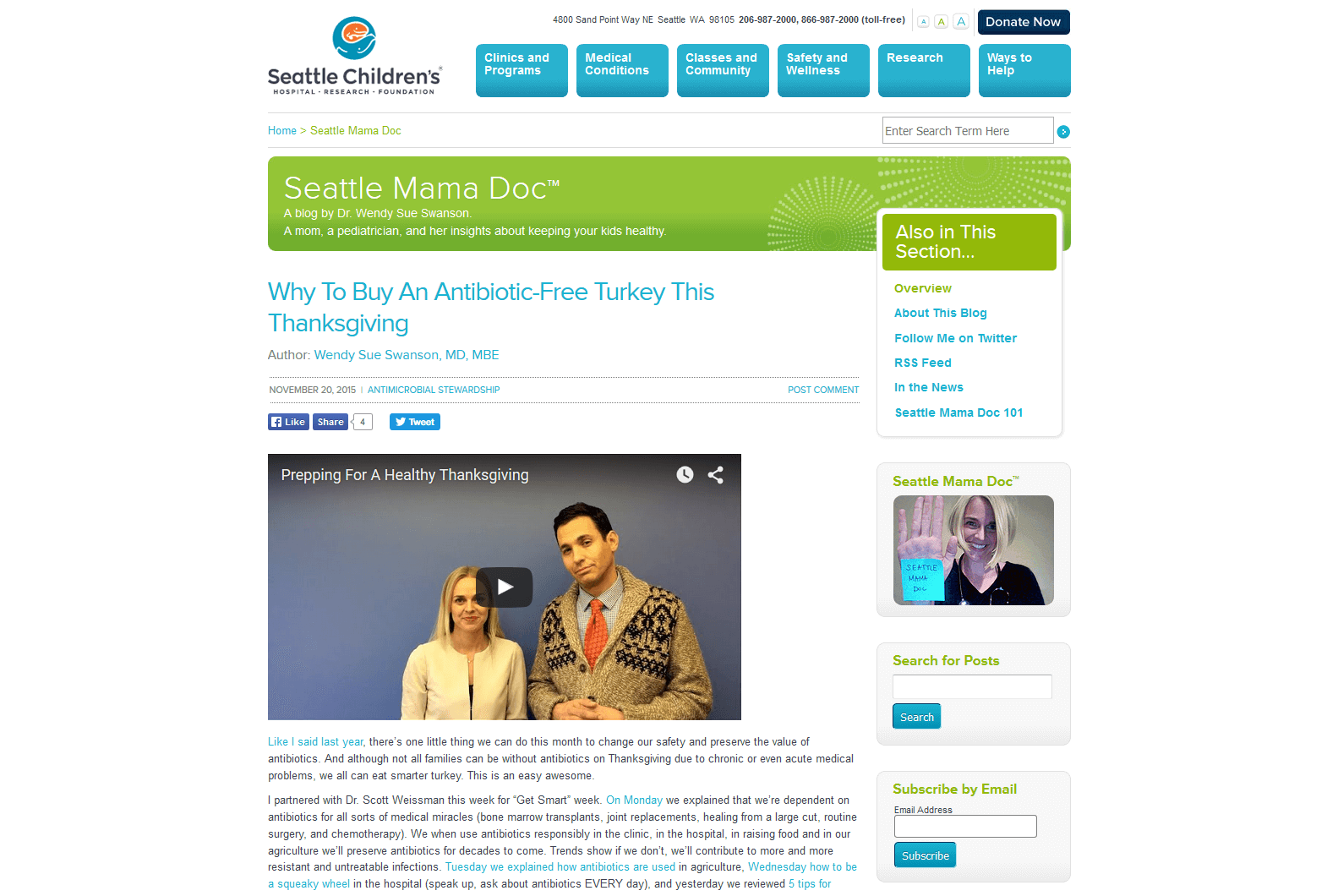 Who she is: A pediatrician in Washington state. She sees patients at the Everett Clinic and is on the medical staff at Seattle Children’s.

Why she’s winning: Dr. Swanson’s bio on her blog sums it up nicely: “Parents just want to do what is right. It’s the defining what’s right that, on occasion, remains elusive. This blog, an attempt to help.” Not only does she “attempt to help” via her blog, she does it through Twitter and Twitter.